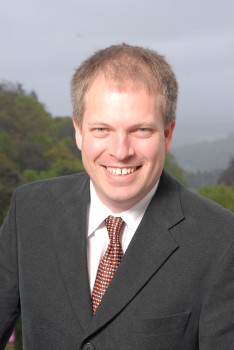 Scotland’s only specialist union for Secondary Teachers, the Scottish Secondary Teachers’ Association, has recently selected North Ayrshire teacher Euan Duncan as its new President. Euan was elected unopposed following a call for nominations from the Association’s districts throughout Scotland.

Seamus Searson, SSTA General Secretary said “I would like to congratulate Euan on his successful election as President and wish him every success in a period where education in Scotland is at the forefront of the political agenda. Euan’s experience as a secondary school teacher and as an SSTA negotiating officer will be invaluable in the coming years”.

A graduate of Durham University, Euan holds postgraduate qualifications from the University of the West of Scotland and Strathclyde University. After an early start in banking, Euan turned to teaching and began his teaching career at Irvine Royal Academy in 1994. Shortly afterwards he took up a permanent post teaching Religious and Moral Education at Kilwinning Academy in North Ayrshire where he has been Principal Teacher of Pastoral Support for the last decade.

Since turning to teaching Euan has been a member of the SSTA, taking up the role of school representative early in his career.   More recently he has been a member of SSTA Council and National Executive. For the last two years Euan has been Convener of the SSTA’s Salaries and Conditions of Service Committee and has represented the SSTA at the Scottish Negotiating Committee for Teachers. He has had a brief spell as Vice President of the Association.

Married with three school-age children, Euan aspires to have the same ambition for all his pupils as he has for his own. An active Christian and self-taught DJ, Euan enjoys making music, cycling, hiking and dinghy sailing.

Euan said, “The SSTA has a strong, effective team serving members throughout Scotland and I look forward to pursuing my work with that team. With the determination of Education Secretary Angela Constance to close the attainment gap, the immediate future is going to be a stimulating time for anyone involved in Scottish education. SSTA members continue to be concerned with deprivation and its impact on learning; there is no doubt that they want to carry on with their commitment to advancing education in Scotland. But with dwindling resources, and reserves depleted by the massive effort to bring about curricular and assessment changes, the big question will be how to sustain that advance. After all, teacher working conditions are pupil learning conditions.”

Published on 27 May 2015 - Information for Members / Press Releases